Look up and live

Special thanks to Elizabeth Brent Treadway for the musical assist.
"Create in Me a Clean Heart" by Keith Green

What's in a name? 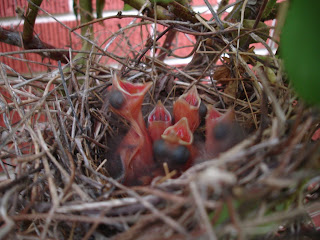 Read Isaiah 35.
Open is hard. Last week, our home was broken into. A few electronics and jewelry that was mostly sentimental in value were stolen. We were lucky, really. No people or pets were hurt. Memories cannot be taken. Stuff can be replaced. What has really been taken is our sense of security. Our immediate response has been to batten down the hatches. Replace locks. Fortify doors. Beef up security. Our eyes are open, all right, but what we are looking for is danger. We fear for our lives.
In the spring of 2006, my mother captured this photo of baby redbirds nesting in a rose bush. They are so open! So trusting! So vulnerable! And that is what makes openness so very difficult. Open is vulnerable. Open is risky. Open can be downright dangerous. When we are open, anyone can come in. And, let’s face it, more than a few jackals, lions and ravenous beats prowl the streets. So it is no wonder that our natural inclination is to shut down. Close ranks. Slam the doors of our hearts and slide the deadbolts securely into place.
But, the irony is that, when we lock ourselves away, we are not open to anyone. Sure, we are not open to predators, but we are also not open to friends, lovers, or helpers. We are not open to the Savior.
This time of year we often sing, “Come, Thou Long-Expected Jesus… from our fears and sins release us.” But, if the Savior is to come, we must be open to receive him. And that requires trust. And faith. And hope.
Have you ever watched children take communion? Many times they will stick their tongues into the little “shot” glasses to get every last drop of juice. I want to be like that. I want to be hungry for God, hungry for grace, hungry for truth, hungry for righteousness, hungry for Jesus. How about you?
Let us pray: Loving God, open us to the saving power of your Holy Spirit. Open our eyes to your truths and our hearts to our neighbors. Amen. 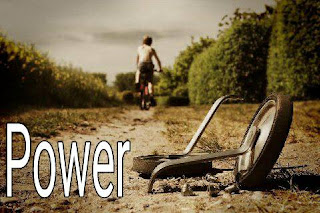 Grandma Moses turned out her first painting at the age of 76. Three years later, her art was hanging at the Museum of Modern Art in New York. Gladys Burrill ran a marathon at the age of 92, earning her a place in the Guinness Book of World Records. In 1987, Teiichi Igarashi became the first centenarian to climb Japan's tallest mountain, and 85-year-old Theodor Mommsen received the Nobel Prize in Literature in 1902. Paul Cézanne had his first art exhibit when he was 56 years old, and Colonel Sanders started KFC when he was 65.[i]


Great things can be done at any age. Great things can be done at any age by anyone at any time … if we will claim the power God gives us, but few things in life scare us more than our own power. We see that clearly in our story today.
The story of Jesus walking on water is just one of many instances in the gospel of Matthew where people use their power. Sometimes, they use it well. Sometimes, they do not. When Jesus was born, the prophets described him as a ruler who will use his power to shepherd the people of Israel. That is immediately contrasted with Herod, who uses his power to kill innocent children. It’s as if Matthew is saying, “The Messiah is NOT that kind of king.” So what kind of king is he? Jesus goes to great lengths to describe his kingdom through a series of parables. Then, suddenly, Matthew moves from word to action.


John is murdered to please an evil queen. Herodias used her daughter to gain the king’s favor, then she used that power to kill. She didn’t have to. Another queen, Esther, found herself in a similar situation. She won the king’s favor and was told that she could have anything she wanted. That’s a lot of power. Esther used that power for life. She used her power to protect the lives of an entire nation of people. Esther used her power to work FOR God. Herodias used power to work AGAINST God.


When Jesus heard that his cousin had been murdered for sport, he set out to find a quiet place to be alone with God. But the people followed him. There were still so many people who were sick and in need of a savior. Jesus was filled compassion, so he used his power to cure their sick. And then he fed THOUSANDS of people with 5 loaves of bread and 2 fish! Talk about power! Jesus used his amazing power to work for God.


But he did not do it alone. Jesus handed the food to his disciples, and THEY fed the crowds. Can you imagine facing five thousand hungry men and their families, and all you have in your hands is that very little bit of food that the Lord has given you? You see the hunger. You see the great need. And you feel so inadequate. But you do what the Master tells you to do. You give the people something to eat, and a miracle occurs. Everyone gets enough. No one leaves hungry.


You move from despair and anger to confusion and joy! You are filled with hope! And confidence! I CAN do this! It turns out that I can do this after all. What the Lord has commanded me to do, God has empowered me to do. You revel in that triumph as you gather up the leftovers.


You would think that would be enough miracle working for one day. But Jesus has one more job for the disciples. One more lesson to teach them. He commands them to get into a boat and cross the Sea of Galilee. He will meet them on the other side.


So the disciples get in the boat and attempt to cross the sea on their own. Sure, it is dark, but these are experienced fishermen. They know their way around a boat. They know how to handle themselves in a storm. So they are not afraid, even though the wind is against them and their boat is being battered by the waves. The disciples are not afraid. At least, not until they see Jesus walking on water. THAT scares them!


Peter is the one who speaks. “All right, if it is you, and we know what you can do, then command me to come to you on the water.” And Jesus says, “Okay. Come on, Peter. Come to me." So Peter jumps out of the boat and begins to walk on water! He is headed straight to Jesus. Everything is fine, until Peter gets distracted. He gets distracted by the wind, and, suddenly, he panics! He begins to doubt his own ability. He doubts his own power. He doubts Jesus. Peter starts to sink.


Now, sometimes, we judge Peter kind of harshly. “Why would he be afraid?” we wonder. “He knows that Jesus is right there.” But remember the panic you felt when you suddenly realized that you were riding your bike without training wheels? Or when you realized that you had swum halfway across the pool without anyone holding you up? Or the first time you had to buy a car ALL BY YOURSELF?!?


It’s scary! Suddenly, you discover that you have more power than you ever dreamed! And it scares you senseless.


Sometimes, we are more afraid of success than we are of failure. If we succeed, things will change. Our lives will be different. Nothing will ever be the same again. So it is no wonder we falter. We see how life is changing. We now see ourselves as people with power. People who can do. As people who can, in fact, do miraculous things! And it scares us. All of sudden, we are not so sure we want to swim. Or ride. Or do it on our own. It would be a whole lot easier just to let someone else keep holding us up!


Of course it does. And that is the good news for us today. Like Peter, we serve a loving master who sends us out into the world, knowing that storms are going to come up. The water is going to get rough sometimes. We might encounter things that we never imagined. And we might get scared. We might not even recognize help when it comes. But help will come. Help will be there. Sure, we might get cocky. We might decide that we can walk on water, too. And maybe we can! If Jesus commands it, we can do all kinds of amazing things! So who knows? Maybe we can walk on water! For sure, we can do anything that God commands us to do… if we do it with God’s help.


Years ago, an Irish emigrant named James Rowe and his friend Howard Smith wrote a hymn of love and hope and commitment. “…Smith was a little man whose hands were so knotted with arthritis that you would wonder how he could use them at all, much less play the piano.” But Rowe’s daughter once said, “I can see them now, my father striding up and down humming a bar or two and Howard E. [Smith] playing it and jotting it down.”[ii]


As difficult, and perhaps as painful, as it must have been for Howard Smith to play the piano, he continued to compose hymns because that is what God had called him to do. And, as a man who had himself once been saved from a stormy sea, Smith knew that “love so mighty and so true merits [the] soul’s best songs. Faithful, loving service, too, to [Christ] belongs.”[iii]


The crossing may be difficult. But remember. Whatever God has called us to do, God will give us the power to do it.

[i] Matthew Cole Weiss. “25 People Who Did Great Things After Fifty.” Published on Ranker at http://www.ranker.com/list/accomplishments-after-50/matthewcoleweiss. Accessed August 13, 2017.
[ii] The story of Love Lifted Me is published online at http://www.cyberhymnal.org/htm/l/l/lliftdme.htm. Posted June 3, 2005. Accessed August 12, 2017.
[iii] James Rowe and Howard Smith. “Love Lifted Me. The Cokesbury Worship Hymnal. Nashville: Abingdon Press, 1938. 233.
[iv] Rowe and Smith, 233.
Posted by Unknown at 11:43 AM No comments: